It's summer in Shetland and time to explore some of the places that have been on the to-do list.  To the West and North West of Ronas Voe lays a head land that I've been looking at on the map for some time now.  Leaving the road to Hamnavoe, Eshaness, a track heads north to a working croft.

I don't know much about the croft or who runs it but the there is a sign on a gate nearby that greets you with the area's name 'South Collarfirth and Tingon'.  The sign then goes on to state 'Managing habitats for biodiversity and actively managing the Tingon nationally important designated site for the benefit of the environment'

If anyone involved in this 'environmental management' ever reads this blog post - hats off to you!  The area is thriving with a very diverse number of wildlife species.  To list some of what we saw - Red Throated divers, Bonxies, Tirricks, Golden Plover, Merlin, Dunlin, Pipits, Shetland Bumblebees and from the cliff tops, Gannets, Seal and Fulmars.

As well as the 'wild' life, there were Shetland ponies, different breeds of sheep and the odd highland cow!  With this in mind, if visiting the area, please respect the good work that has done in fencing off the areas that hold croft/farm animals.  Just follow a fence long enough and you will a gate or other safe place to cross.

To our walk - We set off from the end of the track towards Ronas Voe.  I'd recommend going this direction (anti clockwise) as it's easier to find your way back to your original start point.  Of course, you don't have to do this walk as a 'loop' - you could happily walk one coast one day and the other another time and simply backtrack your course each time.

Passing by the Gossa Water lochs and toward Ronas Voe there are some ruins in the 'Sumra' area - currently only frequented by ponies: 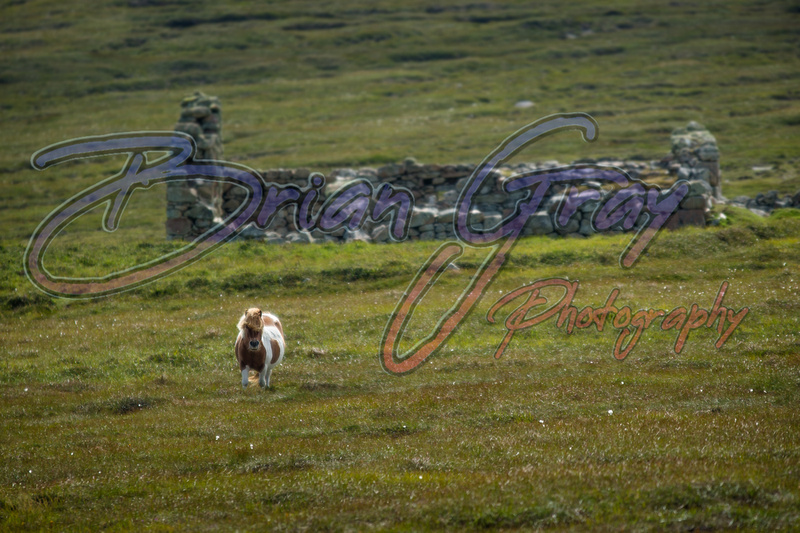 Reaching the west coast of Ronas Voe delivers the first of many great views.  There are many stacks, rocks and small geos in this corner of the Voe along a couple of red sand/shingle beaches.  The beach to the right of this shot has the interesting name of 'Sannions Ayre' with 'Ship's Ayre' a little further away.  Looking at the far left of shot the Voe leads away toward Heylor. 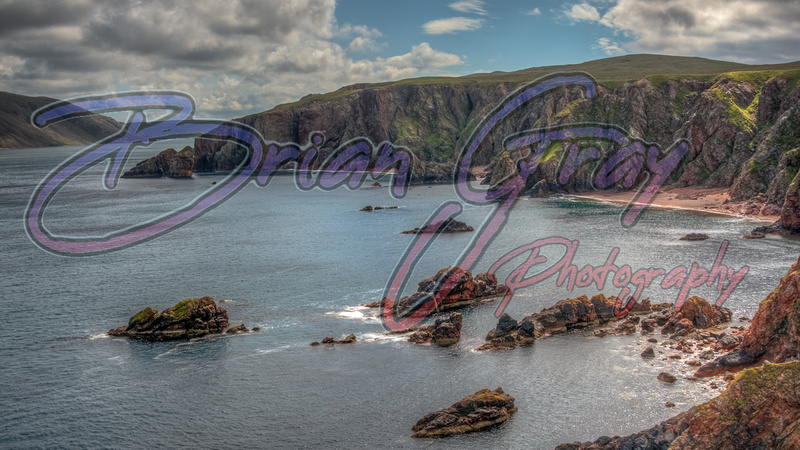 The local geology here has left many stacks on both sides of the voe.  Looking across the voe towards Ronas Hill some of the larger stacks are obvious like The Roodrans (nearest) and The Cleiver (in the middle) and Gruna Stack on the left of shot.  Fantastic names! 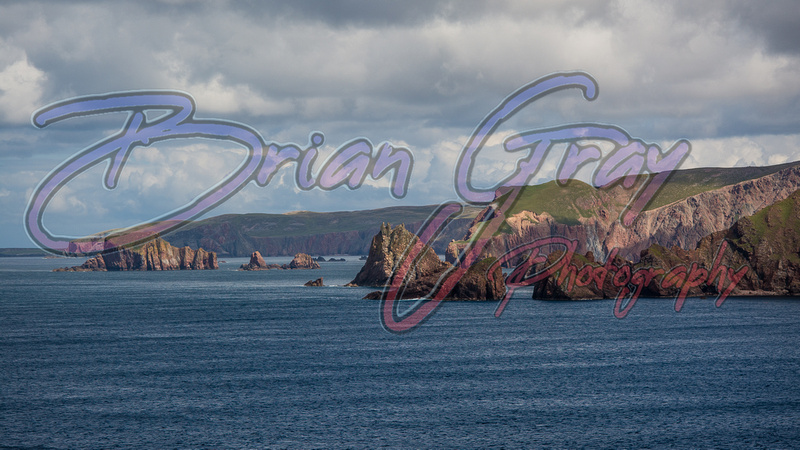 Heading north, up the coast, a fantastic view of the Lang Ayre is possible: 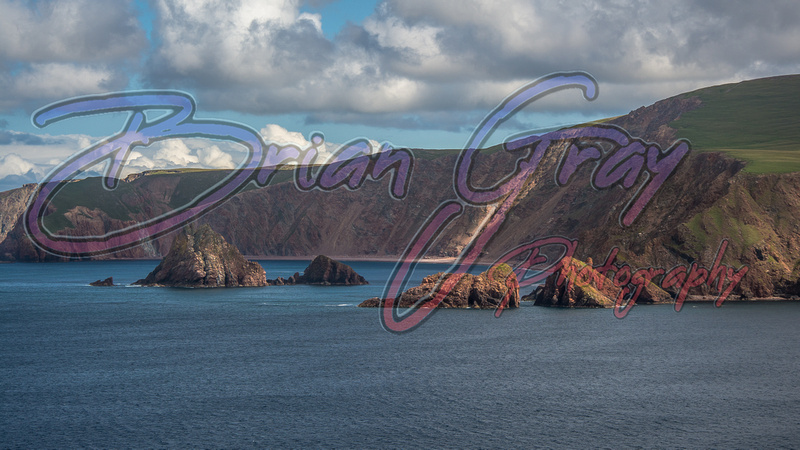 Nearly all round this walk it's possible to see up and down the extended coastline of Shetland's North Mainland.  From near the northern most point of the head land, the Island of Uyea (and all it's sea caves) is visible:

Turning the corner at the northern tip I was looking for a landmark that is known as The Faither.  I didn't know what I was looking for but I think I found it.  Also there, is a wonderful sea stack called Galti Stack and 'The Faither' is an outcrop of land that will someday most likely become a stack similar to Galti.  This area was probably the highlight of the walk with plunging sea cliffs, seas stacks, seas birds and panoramic views over the sea, it has a lot to offer someone who likes being near the coast!  It's really quite breathtaking! 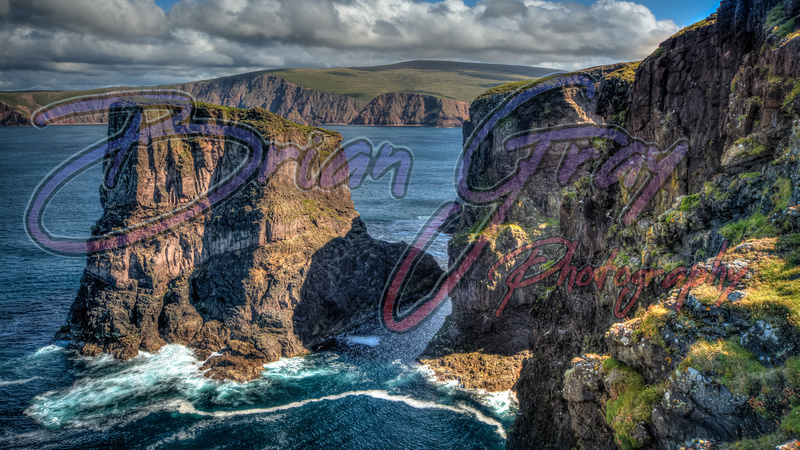 Turning south you are immediately met with what looks like a never ending series of vertical faced cliffs: 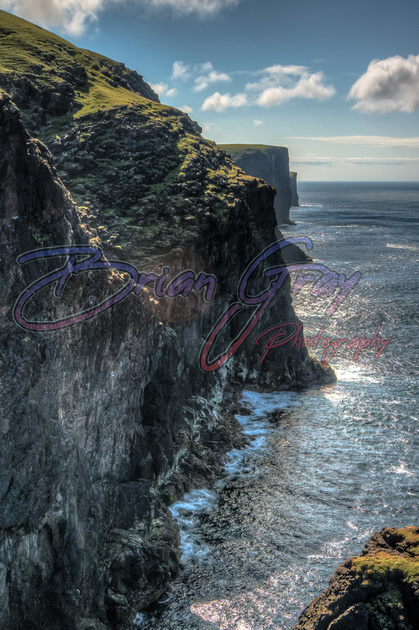 The historical working nature of land is plain to see on the walk south.  Here at Heillia a series of dry stone walls leaves us to visualize and wonder about the days when they were in use.  I can only imagine that making use of the steep sided ravine, these walls completed series of sheep pens.  If anyone know more about their use, please drop me a line! 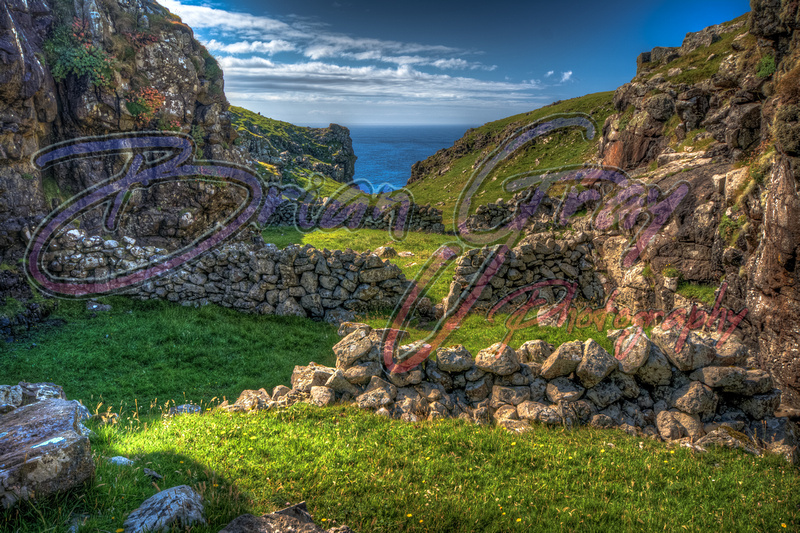 The abandoned croft at Ockran again leaves you to visualize it's previous life: 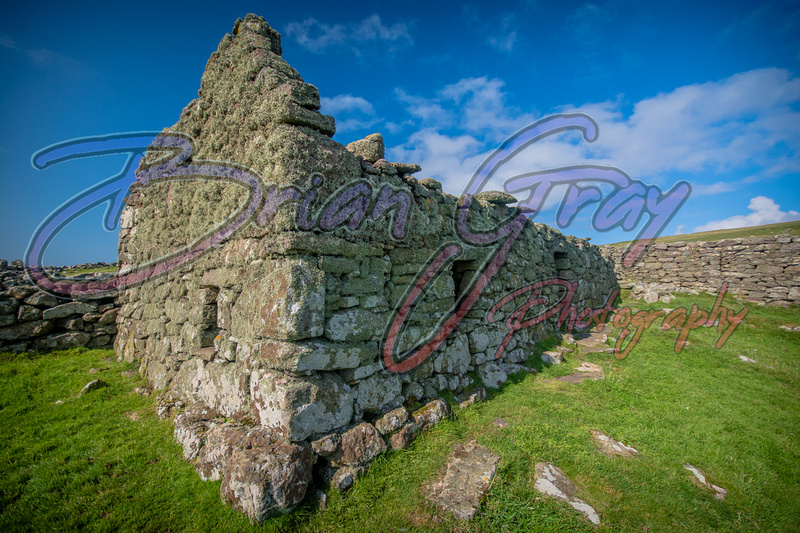 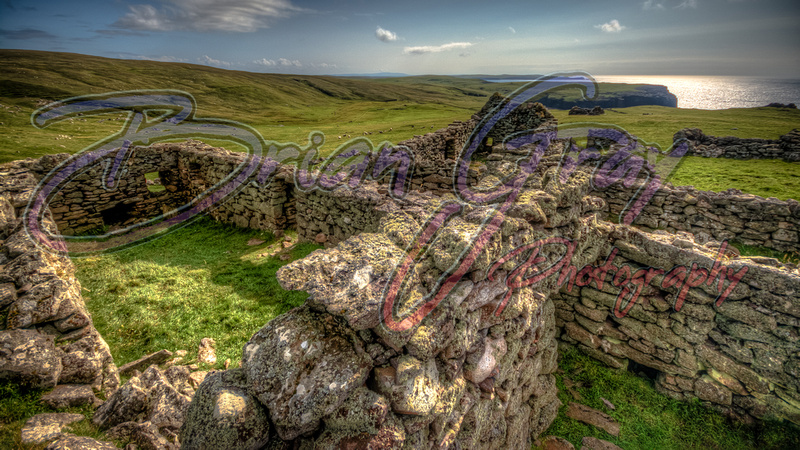 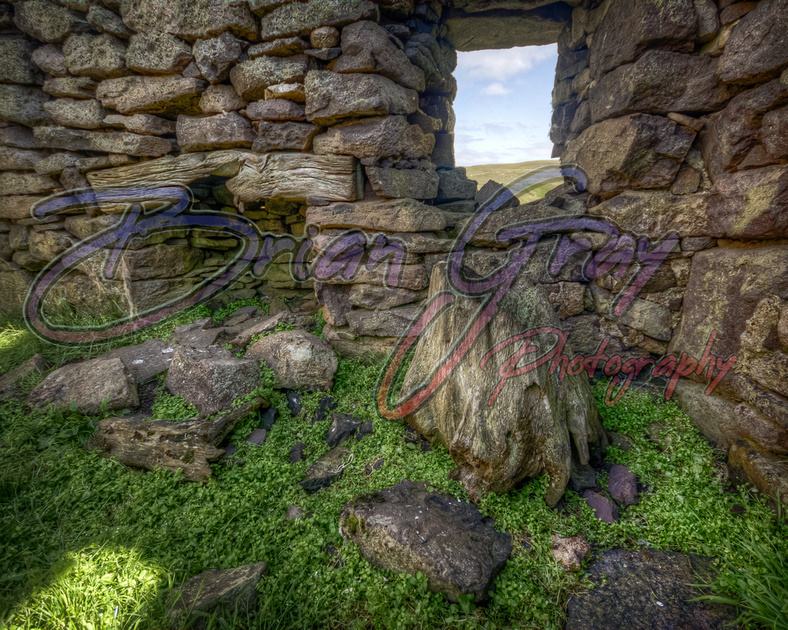 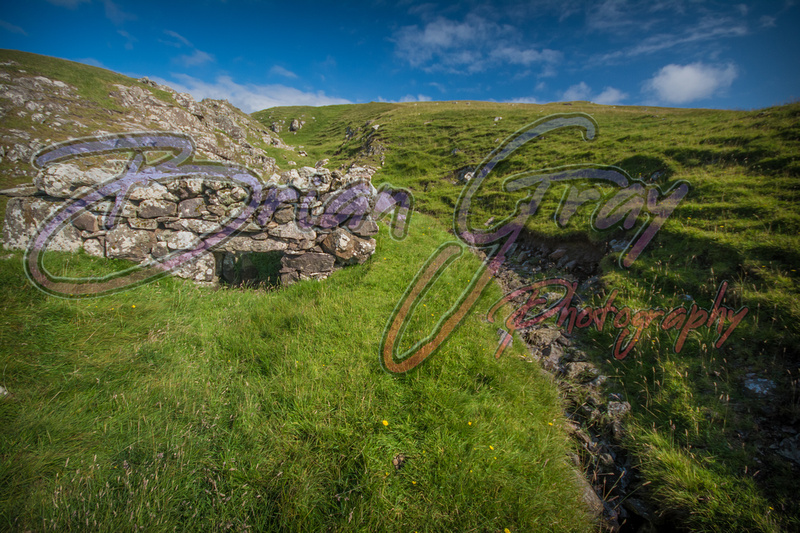 The rest of the trip south along the coast is just one geo after the next.  At this time of year, many a fluffy young Fulmar can still be seen in the nests which have been made on the ledges. They are easy to spot on the opposite sides of these geos. 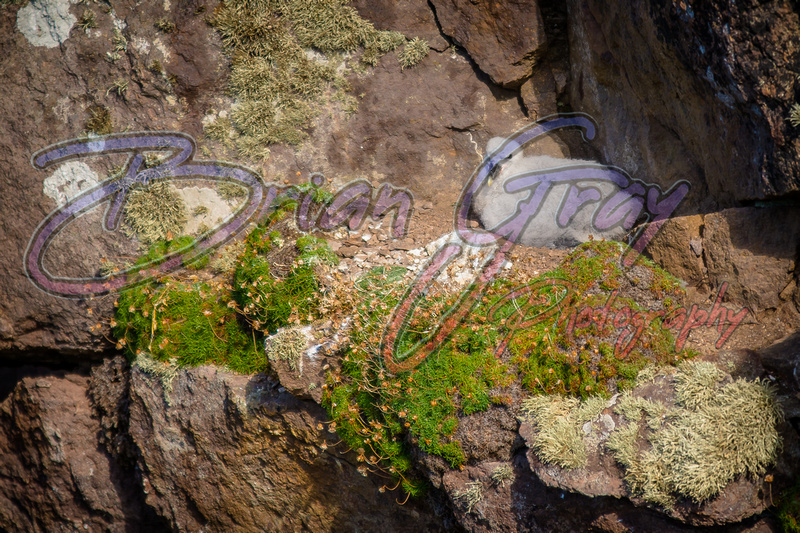 Besides nesting sea birds there are many caves to look for: 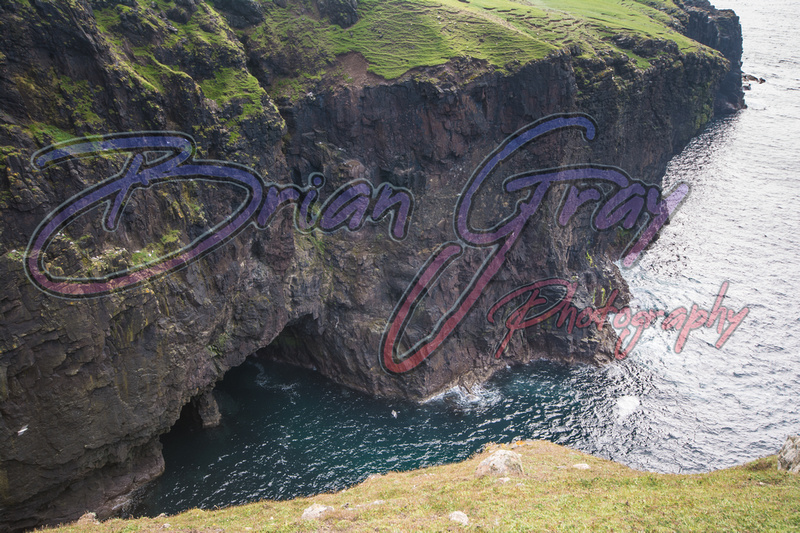 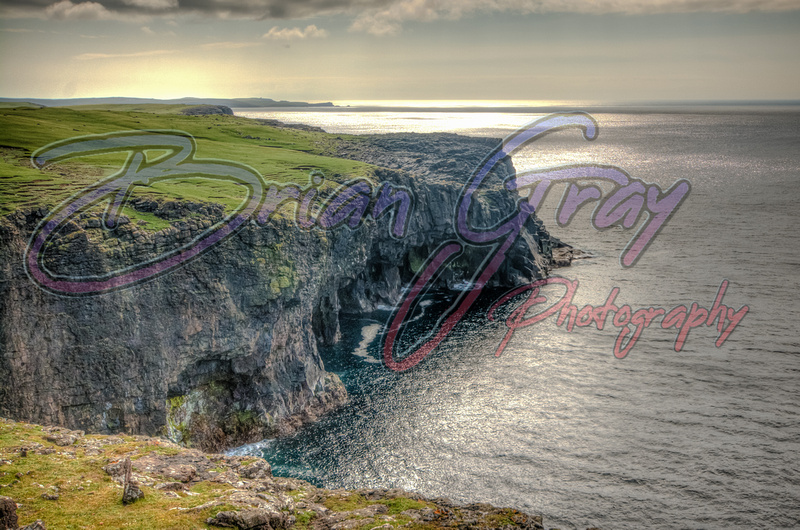 As I mentioned, views up and down the coast are possible all the way around this walk.  In that last photo, above the caves, you can see in the distance another headland with a small object on the top.  That little dot is the Eshaness lighthouse!

I hope you get a chance to view these sight for yourself but till then, have a look at the photos I've taken!

Dougie Gray(non-registered)
Absolutely brilliant Brian. This is the Shetland that we know and love. Your walk is what most people don't see so well done for suggesting and showing a number of fabulous spots to go explore!
Brian D Gray
Thanks Carol! We were very much surrounded by Bonxies and they did swoop down a few times, but we were never 'attacked' as such. They tend to usher you away from what they are protecting - let them!
Carol Anderson(non-registered)
Excel;lent! I have been to Tingon but went the coast back into Hamnavoe but have thought about this walk. Someone told me they were bombarded by bunksies when they went (obviously the wrong time to go!!). A must do sometime......great pics.
Keith Leslie(non-registered)
Very good Brian. Great photos as usual.
No comments posted.
Loading...
Subscribe
RSS
Recent Posts
Muckle Roe Tingon - Circular walk One year later Lerwick Up Helly Aa More Storms Winter Storms
Keywords
Muckle Roe accomodation chapel cliffs guide hams hike humpback lodge
Archive
January February March April May June July August September October November December
© Brian D Gray
Powered by ZENFOLIO User Agreement
Cancel
Continue